Gareth works as the Hydrometry and Telemetry Programme Manager for the Environment Agency in the Wessex region. His team monitors rainfall, soil moisture, groundwater and sea levels and river flows and levels, using specialist equipment at over 500 sites.

Their monitoring assists in the management of rivers and groundwater, including abstraction, discharge, availability and quality, including pollution. In recent years, about 90% of their work has been devoted to flood risk management.

The agency has many flood managements assets, including pumping stations, gates and sluices, spillways, and alleviation and attenuation schemes. They can also deploy temporary defences and pumps and undertake emergency works.

Increasingly, their data and webcams are being made available online – see:

Water flows and levels can be influenced by air and water temperatures, as shown by Simon’s data and other records. They may also change with variations in the Jet stream (strong high winds which move weather systems around the Earth) and Gulf stream (a strong ocean current which brings warmth to the UK). In relation to climate change, a key factor is that warm air holds more moisture, leading to more rainfall. 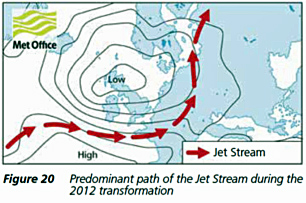 Consistent above average intensity and frequency of rain led to the Somerset floods in 2013/14, when there was very high rainfall in October and then again in December, January and February.

However, annual rainfall recorded at Barrow Gurney from 1910-2016, shows there has been considerable variation in rainfall from year to year and no clear upward trend. It can be noticed that some of the wettest and driest periods have occurred since 2000, but some also occurred going back to the early 1900s.

The table below shows the long-term average rainfall for 30-year periods by month at Maundown. Since 1961-90, there are sizeable increases for July, October, November and December, and small decreases for February and August and an overall reduction for September.

River flow records for the River Tone at Bishops Hull appears to show a clear upward trend from 1968 to 2016.

Data for England and the South West shows a change from drought conditions, with below average rainfall from 2010 to April 2012, changing to flood, with above average from April to September 2012. This lead to a sustained increase in the base flow, along with many high peaks, for the River Tone at Bishops Hull.

The evidence for increases in temperature and rainfall is strong, but increases in flooding and peak river flows are only partially attributable to climate change.